Today Oracle announced a new maintenance release for its Virtualbox 5.0 release with many fixes.

Virtualbox 5.0.12 is the 6th maintenance release in VBox 5.0 series, which brings a few UI improvements, several XHCI and audio fixes, LBA64 support to be able to boot from huge hard disks, a fix to random crash on VM shutdown, and below changes to Linux hosts / guests:

The .deb installers for all current Ubuntu releases are available for download at the link below:

If you’ve a previous release installed and accepted adding the VB repository while the installation, you may have already received the upgrade notification in Software Updater: 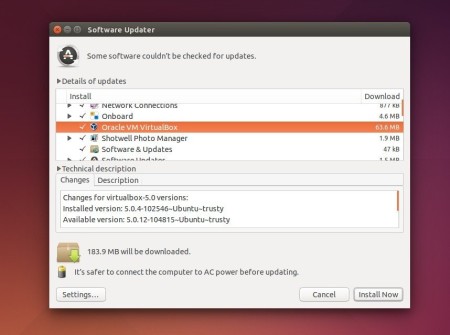