Darktable 2.2 Released! How to Install it in Ubuntu 16.04 | UbuntuHandbook

After 3 release candidates, Darktable 2.2 stable was finally released with over 2k commits since 2.0.0. Also 298 pull requests and 360+ issues have been handled/closed in the new release.

Read the announcement for more details. And see the video below:

The new release has been made into PPA, available for Ubuntu 16.04, 16.10, and Linux Mint 18. Follow the steps below to add the PPA and install / upgrade it:

1. Open terminal (Ctrl+Alt+T) and run the command below to add the PPA repository:

2. For those who have a previous release installed, launch Software Updater (or update manager for mint) and upgrade Darktable after checking for updates. 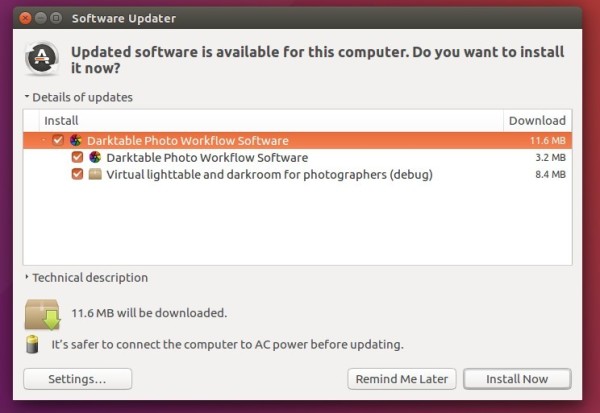 Or just run commands below in terminal to install or upgrade to Darktable 2.2:

For any reason you can restore the Darktable installation to the stock version in Ubuntu main archive by purging the PPA via:

I'm a freelance blogger who started using Ubuntu in 2007 and wishes to share my experiences and some useful tips with Ubuntu beginners and lovers. Please comment to remind me outdated tutorial! And, notify me if you find any typo/grammar/language mistakes. English is not my native language. Contact me via [email protected]om Buy me a coffee: https://ko-fi.com/ubuntuhandbook1

One response to Darktable 2.2 Released! How to Install it in Ubuntu 16.04