Free accounting software GnuCash got a new update recently for its 2.6 stable series.

GnuCash 2.6.18 is primarily comprised of bug fixes, including 2 bugs that are six years old. They are:

How to Install GnuCash in Ubuntu:

The contains the most recent GnuCash packages for Ubuntu 16.04, and Ubuntu 17.04, though the 2.6.18 is not available at the moment (Be patient, it will be available in a few days).

1. To add the repository, open terminal (Ctrl+Alt+T) and run command:

For Linux Mint 18.x, replace $(lsb_release -sc) in the code with xenial.

2. Then install the key so to trust the updates from the repository via command:

3. Once the new release is published in that repository, use Software Updater to upgrade it: 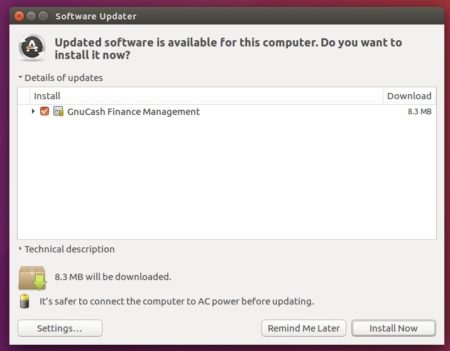 or install GnuCash for the first time via either system package manager or run commands:

To remove GnuCash financial-accounting software, either use system package manager or run command:

GnuCash 2.6.17, the seventeenth maintenance release in the 2.6-stable series of the free financial-accounting software, was released 2 weeks ago. Now you can install it via in Ubuntu 16.04, Ubuntu 17.04, and Linux Mint 18.x.

Open terminal via Ctrl+Alt+T or by searching for “terminal” from app launcher. When it opens, run following commands one by one:

1. Add the GetDeb repository via command:

For Linux Mint 18.x, run following command instead to add the repository:

2. Upgrade GnuCash via Software Updater utility if you have a previous release installed: 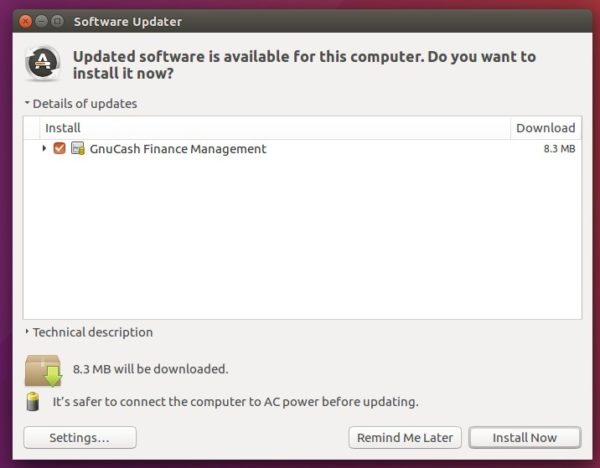 Or install it via commands:

To remove GnuCash, either use your system package manager or run command:

The GetDeb repository can be removed via Software & Updates utility under Other Software tab.

While Ubuntu repositories only provide old versions of GnuCash, here’s how to install the latest version of the financial-accounting software, GnuCash 2.6.16, Ubuntu 16.04, Linux Mint 18, and Ubuntu 17.04.

GnuCash is free small-business financial-accounting software designed to be easy to use, yet powerful and flexible. It allows you to track bank accounts, stocks, income and expenses.

The latest so far is GnuCash 2.6.16, features various bug-fixes and translation updates. 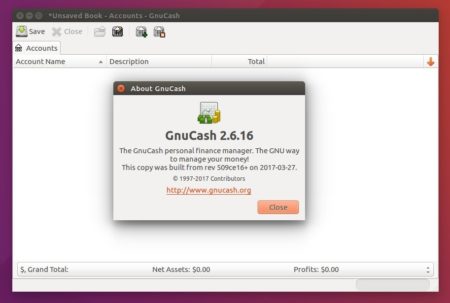 1. Open terminal via Ctrl+Alt+T or by searching “Terminal” from app launcher, when it opens, run command:

Type in your password (no visual feedback) and hit Enter to add the repository.

2. For those who have a previous release installed, launch Software Updater (Update Manager) and upgrade GnuCash after checking for updates:

or simply run commands to update and install the financial-accounting software:

The GetDeb repository can be removed via the Software & Updates utility under Other Software tab.

If you want to downgrade GnuCash to the stock version in Ubuntu repositories, install Synaptic Package Manager via Ubuntu Software, launch it and force install old version of gnucash.

The latest stable release of GnuCash, a personal and small-business financial-accounting software now is at version 2.6.x, announced on 29th Dec 2013.

Preferences have been migrated from GConf to GSettings. This is a simpler and more robust backend which writes to the OS’s native prefs — defaults on OS X and the Registry on MSWindows — and allows us to remove several troublesome dependencies including GConf, ORBit, and DBus. The change includes a migration script that will run at Gnucash startup.

New date handling which allows GnuCash to use dates after March 2038.

Guile-2 compatibility: GnuCash now requires either Guile-1.8 or Guile-2.0 Documents outside of GnuCash, images of receipts for example, can now be linked to transactions, with the facility of opening them in the default application for the document type.

Cutsom Reports can now be saved without renaming the report, and modifications can overwrite an existing report.

GnuCash now requires Gtk+-2.24.0 and GLib-2.26.0. Most of the dependencies on obsolete libraries have been removed; only libgnomecanvas remains. Unfortunately the effort to rewrite the register code to use GtkTreeModel wasn’t completed in time, so GnuCash is not on the cusp of converting to Gtk3.

The Business Module has been substantially revamped, including support for Credit Notes and import of customers and vendors from a CSV file.

The Num field in the register display is now optionally per-split, so for example a check number can be entered for the checking account split and an invoice number for the expense account split.

GnuCash can now open locked books read-only so that more than one user can view a file. GnuCash still does not support multiple simultaneous writers.

For Ubuntu users, build GnuCash 2.6 from source or wait for Canonical updating the universe repository.