PCSX2 is a PlayStation 2 emulator, a free program that tries to replicate the PlayStation 2 console to enable you to play PS2 games on Windows, Linux.

How to Install PCSX2 in Ubuntu:

The program has been made into official Ubuntu repositories since Ubuntu 15.10 Wily, but Canonical does not provide future update for this program. To get the latest version, you may use the official PCSX2 PPA, available for Ubuntu 16.04, Ubuntu 15.10, Ubuntu 15.04, Ubuntu 14.04, and derivatives.

Type in your password (no visual feedback just type in mind) when it asks, and hit enter to continue.

2. After that, run below commands one to install the program:

Or upgrade it via Software Updater if you have a previous release installed. 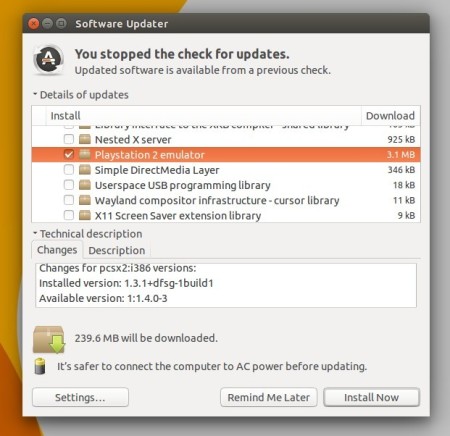 3. To be able to run the emulator, you have to dump the BIOS file from your Playstation 2 console, which is not included with PCSX2 due to Sony copyright. See this forum thread.

4. (Optional) Uninstall PCSX2 via Software Center, or by running below command:

And remove the PPA by launching Software & Updates, and navigate to Other Software tab.