F.lux changes your computer display’s color temperature according to location and time of day. It was designed to reduce eye strain during night-time use and disruption of sleep patterns.

The f.lux for Linux is a command line daemon and the GUI is an indicator applet created by Kilian Valkhof. Though Kilian’s repository does not update anymore, you can still get the applet for Ubuntu 16.04, and Ubuntu 15.10 via below steps. 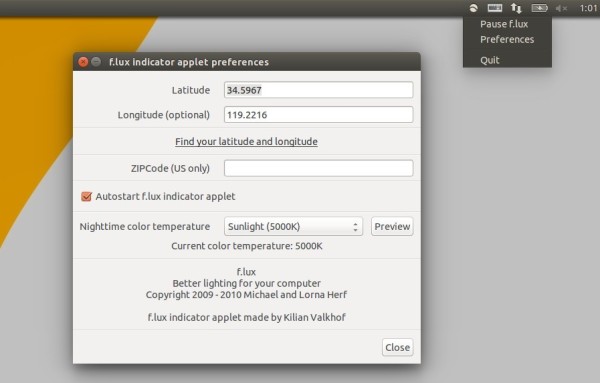 How to Install f.lux in Ubuntu via PPA:

The Linux f.lux GUI is now available in Nathan Rennie-Waldock’s PPA for all current Ubuntu releases.

1. Launch terminal (Ctrl+Alt+T) and run below commands one by one to get it from PPA:

Type in your password when it asks (no visual feedback when typing) and hit Enter to continue.

2. Then update and install the GUI along with xflux daemon via commands:

For those who don’t want to add PPA, download the .deb package for your Ubuntu release from HERE

3. (Optional) To remove the software, use Synaptic Package Manager or just run below command:

The PPA repository can be removed by going to Software & Updates -> Other Software.