DeaDBeeF audio player 1.8.8 was released as the 8th bugfix release for the 1.8 series.

The new release introduced some new features, including reading WAV RIFF tags, handling of Disc subtitle frames in ID3v2 and APE tags, and handling samplerates higher than 192KHz to pulseaudio.

New context menu options “Play Next” and “Play Later” are now available to choose your favorite song to play next, or set one-time play order for songs in play list. It will add marks at the beginning that indicates the sequence. 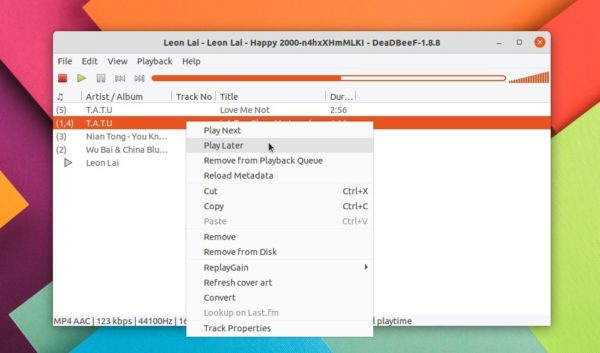 It also redesigned the plugin page in Preferences. Now each plugin has the configuration along with basic info and license in tabs.

Other changes in DeaDBeef 1.8.8 includes:

How to Install DeaDBeeF 1.8.8 in Ubuntu:

Grab the package, ‘deadbeef-static_1.8.8-1_amd64.deb’, then install it by running command in terminal: There’s also an Ubuntu PPA for DeaDBeeF, though it’s not updated at the moment of writing. And note that the PPA package conflicts to the official ‘deadbeef-static‘ package due to packaging issue. Remove the old package first if you’re going to install it from another source.

To remove the music player, simply run command in terminal: