Change Your Linux Notebook To An Unsupported Screen Resolution | UbuntuHandbook

Change Your Linux Notebook To An Unsupported Screen Resolution

Want to change your Linux notebook desktop to an unsupported resolution? Well, there’s a small Nautilus script called newrez. It provides an graphical interface and lets your type in a resolution even higher than your display’s physical dimensions!

Newrez does NOT “over-drive” the actual hardware. Instead, it defines a higher-resolution display on the netbook’s VGA port, and scales it to the LCD.

You are not restricted to “standard” resolutions. Values like 1100×730 or 1350×900 or even 1400×700 will work just fine (and a few-pixel adjustment automatically applied if needed). Setting to ‘default’ will return everything back to normal. 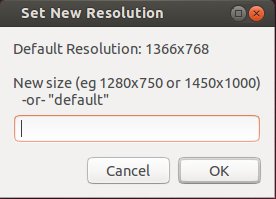 This script can also be run directly from the command line, as in “newrez 1280×800” or “newrez default”. This makes it a simple matter to switch to create scripts or icons that set your most common resolutions, or to include resolution changes into other scripts or launchers.

NOTE: At present, this will not work if you use the vendor-supplied Nvidia or ATI driver.

If the laptop lid is closed and re-opened, you MAY find the the mouse is constrained to an area the size of the default resolution. This is caused by xrandr. Re-execute newrez to fix this.