Sweet Home 3D 4.3 Released, How to Install it in Ubuntu Linux | UbuntuHandbook

Sweet Home 3D 4.3 Released, How to Install it in Ubuntu Linux 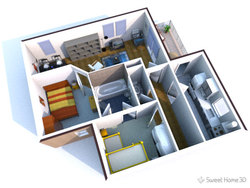 Many users reported in version 4.2 a problem with a 3D view that sometimes remained empty. The developer has fixed that bug, as well as other bugs related to detaching / attaching the 3D view from / to the main window in multiple screens environment. Thus, this release should now work much better in such an environment.

Packages for Windows, Linux, Mac OS are available in this page.

For Ubuntu 13.10, Ubuntu 12.04, Linux Mint and Elementary OS, we can install it from GetDeb repository:

2. Edit the source file by:

3. For Ubuntu 13.10 add below line into the file, change saucy to precise for Ubuntu 12.04 and its derivatives: