Exaile is a music player that was originally conceived to be similar in style and function to KDE’s Amarok 1.4, but uses the GTK+ widget toolkit rather than Qt. It is written in Python and utilizes the GStreamer media framework.

In addition, Exaile supports plugins that provide features such as ReplayGain support, an equalizer with presets, previewing tracks via a secondary soundcard, iPod support, and Moodbar integration. 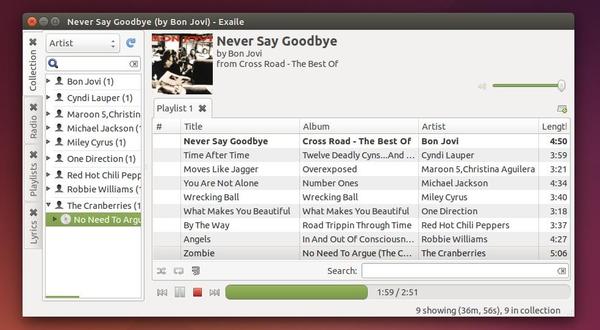 So far, the latest release is Exaile 3.4.1 which was released on Nov 1, with below changes:

Thanks to Web Upd8 Team, you can get the latest Exaile release from the PPA.

Press Ctrl+Alt+T on keyboard to open terminal. When it opens, paste and run below commands one by one:

Above command will add the Web Up8 Team Main PPA, update your system package lists, and finally install exaile as well as plugins. After that, you can receive future updates by running regular updates via Software Updater.

For those who don’t want to add the PPA, grab the .deb installer for exaile and plugins from launchpad page.