The Light Table IDE got a fairly major update a few hours ago by releasing the Light Table 0.7.0. And the 0.7.1 release was out just one hour later with few bug fixes.

Light Table 0.7.0 is a big clean up release with lots of little fixes, but there are a number of big changes that warranted it being a more significant version increase: 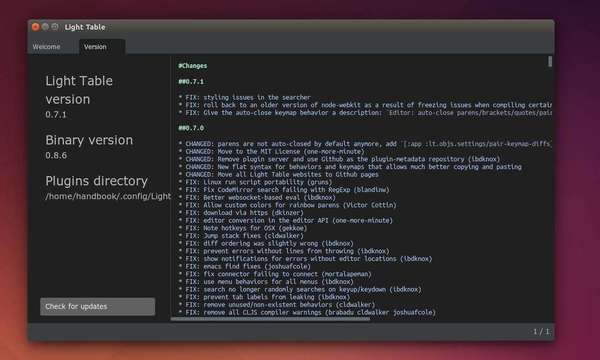 How to Install Light Table in Ubuntu:

The official website provides the binary packages for Linux. Here is how to install it in Ubuntu Unity. Tested in Ubuntu 14.10, should also work in Ubuntu 14.04 and Ubuntu 12.04.

1. Download the Light Table package from the link below:

2. Once the downloading process finished. Press Ctrl+Alt+T to open terminal, and then run the command below to open the Downloads folder as root (Administrator), so that you have the privilege to extract the package to /opt/ for global use.

You need to install gksu from Ubuntu Software Center if you don’t have it installed. 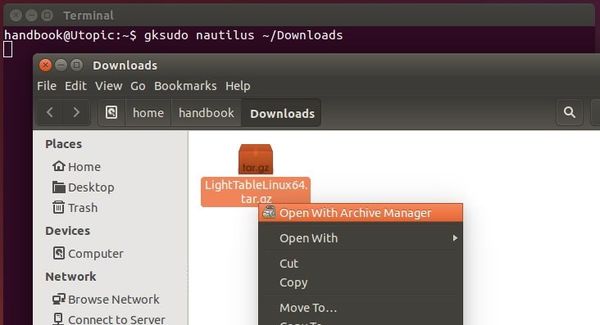 When the folder opens, right-click on the package and select “Open With Archive Manager”.

3. Once the package opens, click the Extract button and select extract to Computer -> /opt/. 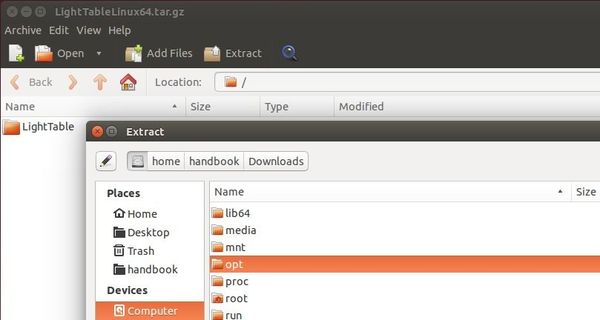 When done, close the Archive Manager and the Downloads folder.

Now you should be able to launch Light Table via command below:

4. If everything’s OK, let’s create an app shortcut so that you can launch it from the Unity Dash or Menu.

Run command below in terminal to create .desktop file and open it with Gedit text editor:

When the file opens, paste below into it and click the save button.

Finally start Light Table IDE from the Unity Dash or Menu and enjoy!