Choqok, a free and open-source micro-blogging client for KDE, has reached the 1.5 release recently. It has been more than one year since the previous version was released in September 2013. 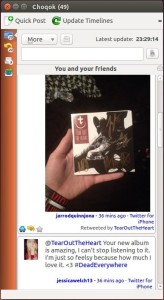 How to Install / Upgrade Choqok in Ubuntu:

To add the PPA, open terminal from menu and run command:

Then update package cache and install or upgrade the app by running below two commands one by one: