How to Install The Latest Arduino IDE 1.6.6 in Ubuntu | UbuntuHandbook

How to Install The Latest Arduino IDE 1.6.6 in Ubuntu

Quick tutorial shows you how to the latest Arduino IDE, so far its version 1.6.6, in all current Ubuntu releases.

The open-source Arduino IDE has reached the 1.6.6 release recently with lots of changes. The new release has switched to Java 8, which is now both bundled and needed for compiling the IDE. See the RELEASE NOTE for details. 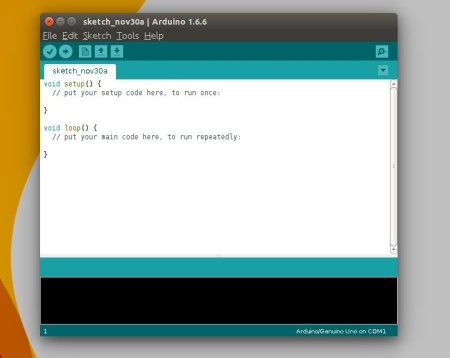 For those who don’t want to use the old 1.0.5 version available in Software Center, you can always follow below steps to install Arduino in all Ubuntu releases:

Replace the words in red for future releases

1. Download the latest packages, Linux 32-bit or Linux 64-bit, from the official link below:

2. Open terminal from Unity Dash, App Launcher, or via Ctrl+Alt+T keys. When it opens, run below commands one by one:

Navigate to your downloads folder:

Move the result folder to /opt/ directory for global use:

3. Now the IDE is ready for use with bundled Java. But it would be good to create desktop icon/launcher for the application:

Give executable permission to install.sh script in that folder:

Finally run the script to install both desktop shortcut and launcher icon:

In below picture I’ve combined 3 commands into one via “&&”:

34 responses to How to Install The Latest Arduino IDE 1.6.6 in Ubuntu