How to install FreeType 2.7 in Ubuntu 16.04 via PPA | UbuntuHandbook

FreeType, a popular font rendering engine, has reached the 2.7 release with a new default mode for bytecode hinting: Subpixel hinting.

In case you are already using subpixel hinting (for example, by using the ‘Infinality patches’ as provided by some GNU/Linux or BSD distributions, or directly from bohoomil.com), be noted that the new mode might provide subtle differences; the code was simplified to make it much faster. If you are used to the old full-pixel hinting, you will see many rendering changes. If you really dislike them, you can disable them at compile time or using the new FREETYPE_PROPERTIES environment variable.

The new release also has improvements to its smooth rasterizer to make it about 20% faster, fixes to fuzzer, handling of raw CID fonts, and various other bug fixes and improvements. See details at FreeType.org.

The Ubuntu 16.04 build has been made into PPA, available for install/upgrade by following the steps below:

2. To upgrade from a previous release, just launch Software Updater and you’ll see the new release available in the update list: 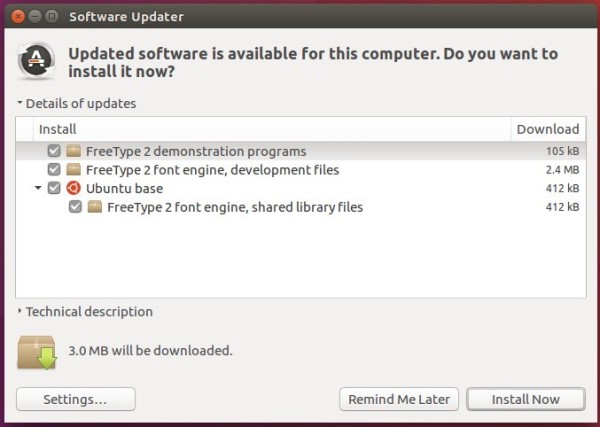 Or run the commands below to install or upgrade it from command line:

Simply purge the PPA via ppa-purge will downgrade FreeType to the stock version in Ubuntu 16.04 repository:

One response to How to install FreeType 2.7 in Ubuntu 16.04 via PPA