Intel Graphics Update Tool, formerly known as the Intel Graphics Installer, has now reached the 2.0.3 release with support for Ubuntu 16.10 and Fedora 24.

The Intel® Graphics Update Tool for Linux* OS (formerly known as the Intel® Graphics Installer for Linux*) was renamed starting from version 2.0.2, in order to more accurately reflect the purpose of the tool. Linux distributions already include by default an Intel® graphics driver, without needing any extra installation. This tool aims to make the latest Intel® Graphics Stack available before it gets officially released by Linux* OS vendors. Specifically, it benefits those Linux* users of both Ubuntu* and Fedora* distributions who want to update their graphics subsystems for Intel® platforms.

Version 2.0.3 of the update tool is targeted specifically at both Ubuntu* 16.10 and Fedora* 24. Earlier revisions for those Linux distributions are now deprecated and are no longer being supported by the update tool. Please upgrade to a more recent version of your OS distribution if you want to take advantage of this release.

The 2.0.3 release includes the Mesa 12.0.3 3D Graphics Library, Cairo 1.15.2 graphics library, libva-intel-driver 1.7.2, as well as all the libva related libraries, such as libva-wayland, libva-tpi, libva-glx, libva-egl, libva-drm, libva-x11, and libva-utils. Also Intel Graphics Stack Recipe 2016Q3 for Linux is supported in this release. 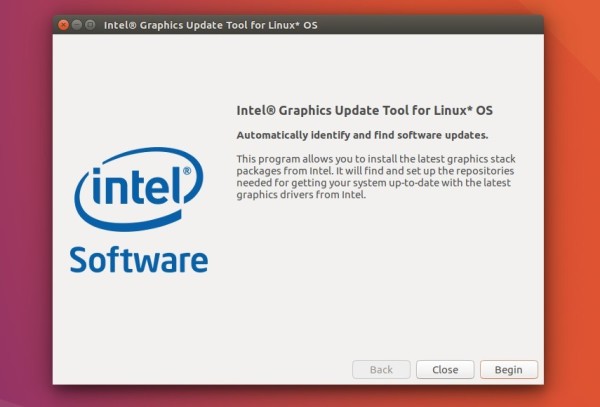 For Ubuntu, they are .deb binaries, just grab the one matches your OS type, and click to open & install via Ubuntu Software. 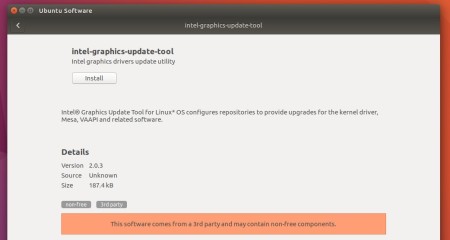 Once installed, launch it from Unity Dash and enjoy!

One response to Intel Graphics Update Tool 2.0.3 for Ubuntu 16.10 Released