0 A.D. Alpha 22 Released, How to Install it in Ubuntu | UbuntuHandbook

The twenty-second alpha version of the free and open-source real-time strategy game of ancient warfare, 0 A.D. Alpha 22 “Venustas”, was released a few hours ago.

The Wildfire Games team is currently building (and testing) the PPA packages. It will be soon available in the official PPA for Ubuntu 14.04, Ubuntu 16.04, Ubuntu 17.04, Ubuntu 17.10, and their derivatives.

Type your password (no visual feedback while typing due to security reason) when prompts and hit Enter.

2. Then upgrade the game from an existing release via Software Updater: 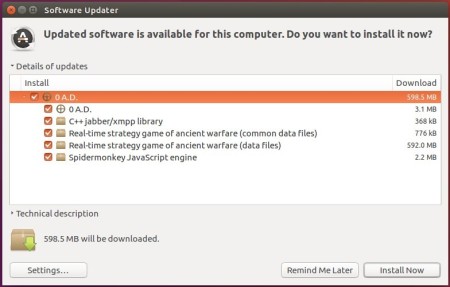 Or simply run commands to update and install the game:

Purge the PPA via the following command will remove the PPA as well as downgrade 0 A.D. to its stock version in your Ubuntu:

If you still want to remove the game, either use your system package manager or run command: