GIMP, the popular free and open-source cross-platform image editor, now is available as Snap app for Ubuntu 14.04, Ubuntu 16.04, and higher.

GIMP has been made into the beta channel of Ubuntu Snappy Store for testing for days. Now the latest GIMP 2.8.22 is available in stable channel:

1. For Ubuntu 14.04 and Ubuntu 16.04 users that have not installed any Snap app, install snapd daemon first via command (open terminal via Ctrl+Alt+T):

2. Then install GIMP snap app either via command: 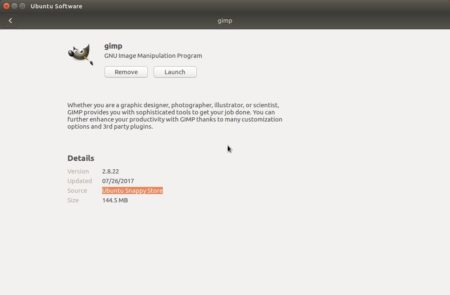 The snap app can co-exist with the traditional GIMP package. So if you have both versions installed, you have to launch GIMP Snap app via following command since the app launcher opens the traditional one:

How to Remove GIMP Snap app: