Battle for Wesnoth 1.16.0 Released! How to Install in Ubuntu | UbuntuHandbook

Battle for Wesnoth 1.16.0 Released! How to Install in Ubuntu

After more than 2 years of development, the new major Battle for Wesnoth 1.16.0 was finally available to download.

It has overhauled the Dunefolk to improve balance against the six Default factions. Most of the Dunefolk faction’s units have new and-or updated animations. There is also a new unit called falconer, which is a branch in the skirmisher line.

For multiplayer, it added roll N chat command, new Information button in the lobby to show server related information and ongoing tournaments being held. It’s possible to press F1 to view in-game help in the multiplayer lobby. And, the Private Replay checkbox is available in the game create screen. Other changes in Battle for Wesnoth 1.16.0 include:

How to Install Battle for Wesnoth 1.16.0 in Ubuntu Linux:

The Windows EXE, macOS dmg and source tarball are available to download at the link below:

Linux user may play the game via Steam or itch.io. It’s also available to install separately via the universal Flatpak package in Ubuntu 20.04, Ubuntu 21.10, Ubuntu 18.04 and even older releases. And below will tell you how:

Firstly, search for and open terminal from start menu (activities overview). When it opens, run command to install the daemon:

Next, add the Flathub repository that hosts the software packages via command:

2.) Install Battle for Wesnoth as Flatpak.

After setting up the daemon, run the command below in terminal:

Both Wesnoth 1.14.x and 1.16 are available in the repository. You need to type number to choose which to install, and type y to confirm. 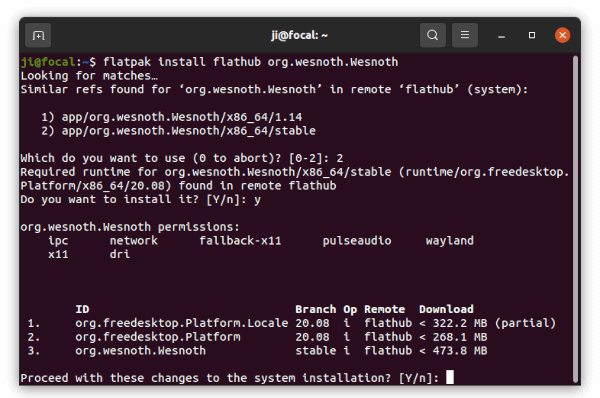 When everything’s done successfully, launch the game from start menu (searching from activities overview) and enjoy!

For any reason, you may run command in terminal to remove the package: