Install Grub Customizer to Configure the Boot Menu in Ubuntu 22.04

For Linux users want to configure the boot menu screen, Grub Customizer is always a good choice for beginners.

I’ve written quite a few tutorials about the default boot-loader, which is called Grub, including set default OS to boot, install themes, add kernel parameters for hibernate, custom screen resolution, etc. All of them can be done via Grub-Customizer besides editing the configuration file. Grub Customizer is removed from Ubuntu 22.04 repository due to its broken logic issue. See this bug for details

However, there are some customizations that are apparently not doable by simply editing the existing configuration scripts. For those, the program moves all existing conf scripts out of the way, and instead installs “proxy scripts” written in a custom language that basically filter the output of the original scripts…

In general, Grub Customizer works for what it does, but it has logic issue about how it do the customizations that might cause issues (especially for upgrading system). So Ubuntu developer team remove the package from the universe repository.

How to Install Grub Customizer via PPA in Ubuntu 22.04

The software developer has updated the app claimed that the bug mentioned above has been fixed. And, the package has been published in its official Ubuntu PPA.

Firstly, press Ctrl+Alt+T on keyboard to open terminal. When it opens, run the command below to add the PPA:

Type user password when it asks (no asterisk feedback), then hit Enter to continue. After adding the PPA, you may run the apt command to install the tool in Ubuntu 22.04:

NOTE: For Ubuntu based system, it may need to run sudo apt update to update package cache first.

Once installed, click on top-left ‘Activities‘ then search for and open the tool. 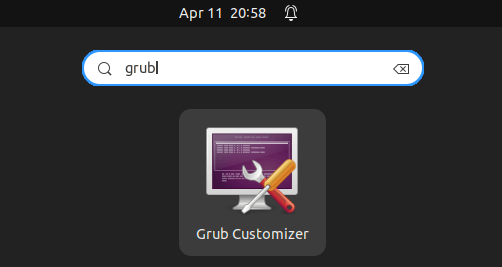 In the first tab, you may edit the text to display, add, remove, and/or re-arrange the menu entries. For dual-boot or multi-boot machine, it’s possible to select which entry as default under General settings page. There are as well menu visibility and kernel parameters options (see the first screenshot). After configuration, remember to click ‘save‘ button to apply changes. That’s all.

8 responses to Install Grub Customizer to Configure the Boot Menu in Ubuntu 22.04