How to Install Simple Screen Recorder in Ubuntu via PPA | UbuntuHandbook

How to Install Simple Screen Recorder in Ubuntu via PPA

SimpleScreenRecorder is a Linux program to record programs and games. It aims to be powerful and really simple to use. It’s ‘simple’ in the sense that it’s easier to use than ffmpeg/avconv or VLC, because it has a straightforward user interface. 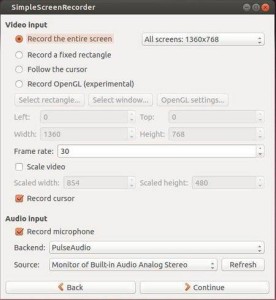 This recorder has below features:

To install it, press Ctrl+Alt+T on keyboard to open terminal. When it opens, run commands below one by one:

# if you want to record 32-bit OpenGL applications on a 64-bit system:

For Arch Linux, Gentoo, OpenSUSE and other Linux packages, refer to the app homepage