Firefox 27 Lands in Ubuntu, Here’s How to Upgrade | UbuntuHandbook

Firefox 27 Lands in Ubuntu, Here’s How to Upgrade

The latest version of Firefox is usually available as a security update in all supported releases of Ubuntu within a few hours of Mozilla’s announcement.

This time, Canonical announced the updated to Firefox 27 in its supported Ubuntu releases six days later since it was released on February 4, 2014. See what’s new in Firefox 27

To get started, make sure the recommended updates repository is enabled.

Then you can install the Firefox updates via Software Updates: 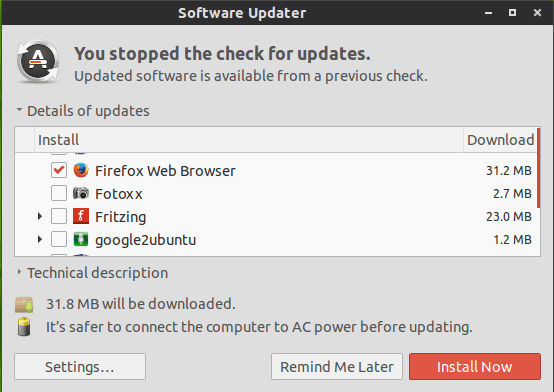 You can also use Synaptic Package Manager (available in Ubuntu Software Center) to upgrade your firefox: