Miro, formerly named Democracy Player or DTV, is an audio, video player and Internet television application. It integrates an RSS news aggregator and podcatcher, a BitTorrent client (based on libtorrent), and xine media player (or GStreamer) under Linux.

Miro is free software, released under the terms of the GNU General Public License. While Ubuntu repositories still have Miro 4, the latest release has reached Miro 6 which brings flash support for Linux and big speed improvements for launching the app, navigating, downloading, etc. 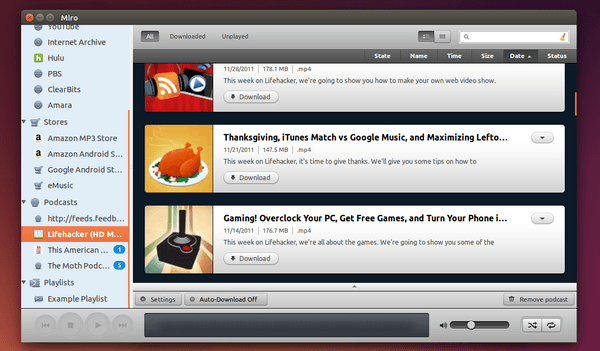 I’ve made the packages for Miro 6 into my PPA, available for Ubuntu 14.04 Trusty Tahr. To install it, follow the steps below:

UPDATE: Sorry that I have moved the packages from the ppa:ubuntuhandbook1/apps repository to ppa:ubuntuhandbook1/ppa as a workaround , because someone copied my content (without even a link back) and got indexed by google before this post. So my post becomes duplicate in Google’s search result!

I’ve emailed the guy who copied my content to ask a link back, but with no luck. I feel so sad because hours of my hard work has been stolen. Please help me if you know what should I do.

1. Press Ctrl+Alt+T on keyboard to open the terminal. When it opens, run the command below to add the PPA:

2. Because Ubuntu 14.04 started shipping the libav fork instead of FFmpeg, we also need the PPA for FFmpeg libraries.