How to Install Komodo Edit 9 in Ubuntu 14.04 | UbuntuHandbook

Komodo IDE and Edit 9.0 was release on March 24 with below changes:

UPDATE: There’s now a PPA repository that contains Komodo Edit 9 for Ubuntu, so you don’t have to do below steps, instead, running below commands one by one in terminal to get it from PPA:

2. Extract the downloaded package through your file browser: 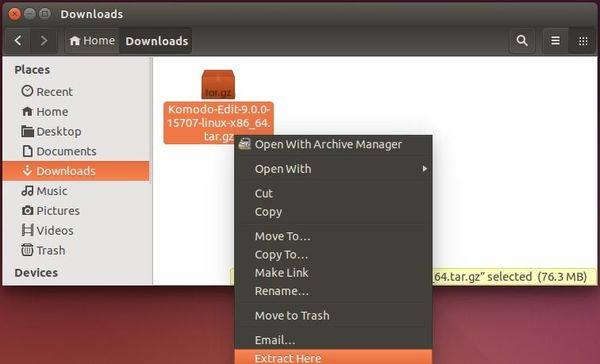 3. Result folder contains an installer script. All you have to do is open terminal from the Dash/Menu or by pressing Ctrl+Alt+T on keyboard. When it opens, run below commands one by one:

4. If you don’t see the launcher icon in Desktop, Unity Dash, or Application Menu, you may run it for the first time from user’s Home folder -> Komodo-Edit-9 -> bin.