How to Install Audacious 3.8 Stable in Ubuntu 16.04 | UbuntuHandbook

The Audacious audio player has reached the 3.8 stable release recently. Here’s how to install it in Ubuntu 16.04 via PPA.

The 3.8 release features the ability to run multiple instances of Audacious. Instances are numbered and can be started with audacious -2, audacious -3, and so on; once running, they can be controlled with audtool -2 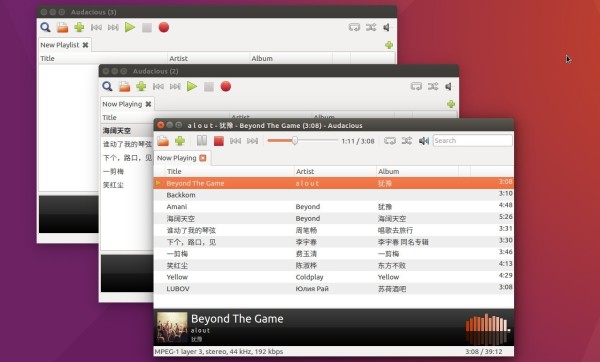 The webupd8team has been maintaining the Audacious packages via PPA for very long time. I’d recommend you to use this PPA though the 3.8 release is not available at the moment, check out the PPA page.

Once it’s available, run the below to add the PPA:

Then upgrade Audacious via Software Updater.

While Audacious 3.8 is not available in any PPA at the moment, I’ve uploaded my personal build into PPA, available for Ubuntu 16.04 and Linux Mint:

2. Then launch Software Updater, and do “partial upgrade” since the 3.8 release uses the new library versions.

Or just run command to install or upgrade Audacious player:

3. (Optional) Uninstall Audacious 3.8 from the PPA and downgrade to the stock version in Ubuntu 16.04, run command: