New features in RawTherapee 5.4 include:

How to Install RawTherapee 5.4 in Ubuntu:

1. Open terminal either via Ctrl+Alt+T or by searching for “Terminal” from app launcher. When it opens, run command:

Input your password (no visual feedback when typing) when it prompts and hit Enter to add the PPA.

2. After that, upgrade the software via Software Updater if a previous version was installed: 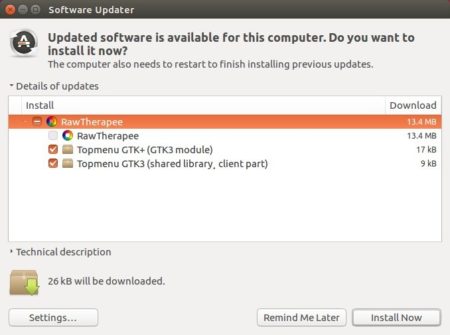 The upgrading process may be kept back if you were installing it from Ubuntu Software App.

A workaround is simply running following commands instead to install or upgrade RawTherapee:

To uninstall the free raw developer, run command in terminal:

And remove the PPA via “Software & Updates” utility under Other Software tab, by removing the line says “http://ppa.launchpad.net/dhor/myway/ubuntu”.