Following the lead of Debian and Fedora, the new release now features dual Qt5 + GTK2 build by default. And it offers an option in the Settings to make it easy to switch between Qt and classic GTK interfaces. 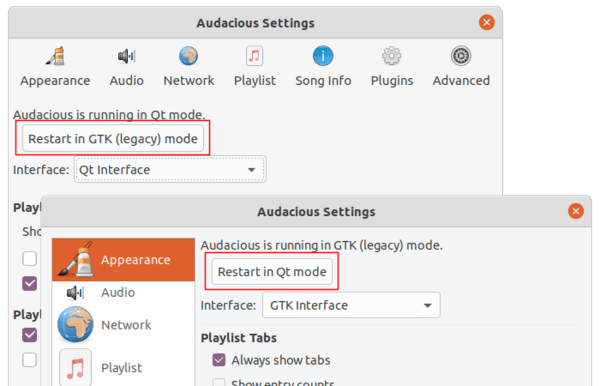 Audacious has been updated to version 4.2, feature new dark mode support and Flat icon set in both light and dark mode.

Install Audacious 4.2 via PPA in Ubuntu:

The new release package has been made into the Ubuntu PPA. Due to a compile issue and lack of time for debugging, Ubuntu 16.04 build is excluded.

1. Open terminal by either pressing Ctrl+Alt+T on keyboard or searching for ‘terminal’ from application menu. When it opens, run command to add the PPA:

Type your password (no asterisk feedback) when it prompts and hit Enter to continue.

2. Then run commands one by one in terminal to install or upgrade the audio player:

NOTE: If you got problem installing / updating the audio player, remove the old packages first by running the command in the bottom.