Changes in the latest HexChat 2.16.0 include: For Ubuntu and other Linux, the client so far only available via universal Flatpak package which runs in sandbox. And below is how to install HexChat 2.16.0 flatpak in Ubuntu 18.04, Ubuntu 20.04, Ubuntu 21.04, Ubuntu 21.10 and their based systems.

2.) Next install the Flatpak daemon if you don’t have it, by running command in terminal:

NOTE for Ubuntu 18.04, you have to add THIS PPA to be able to install the package.

3.) Add the flathub repository that hosts the flatpak packages by running command: 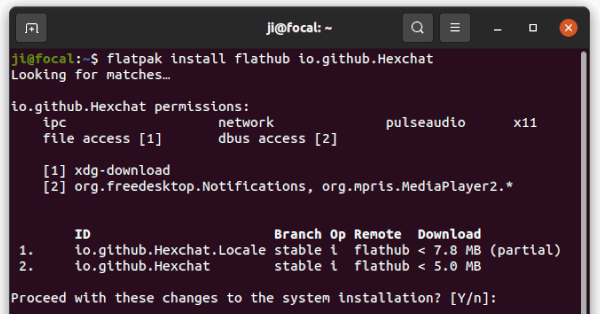 NOTE the Flatpak package co-exists with native deb and snap, so you may have more than one app icons in overview search box. If so, you may run the command below in terminal to launch HexChat Flatpak:

How to Remove HexChat: