QMplay2, a qt-based media player and downloader just got a new update. As you may know, QMplay2 plays all formats and stream supported by ffmpeg and libmodplug (including J2B). Also it has an integrated Youtube browser.

According to the changlog, the new release fixed ALSA issue, improved the code and playback settings, added the possibility to record covers as well as German translations.

QMplay2 is updating frequently, one or two weeks per release, the best way to get the player is using the PPA repository.

After that, you can always run below commands (or use Synaptic Package Manager) to install or upgrade QMplay2:

Qmplay2 is a Qt-based Media Video Player for Ubuntu Linux and Windows. It plays all formats and stream supported by ffmpeg and libmodplug (including J2B). It has integrated Youtube browser.

This simple and brief tutorial is going to show you how to install Qmplay2 in Ubuntu 13.10 Saucy, Ubuntu 13.04 Raring, Ubuntu 12.04 Precise, Ubuntu 12.10 Quantal, Linux Mint and Elementary OS via the PPA repository 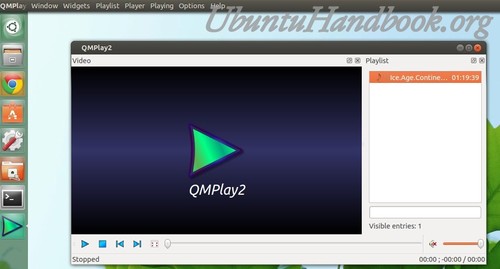 To get started, press Ctrl+Alt+T on your keyboard to open terminal. When it opens, run below command to add the PPA: