Budgie desktop has a single panel budgie-panel which uses trivial amounts of RAM (in the region of 7MB) when started. However, when you first open the menu, GTK actually loads the images. This needs to be hacked a bit, as it delays the first open, and should be done in an asynchronous manner.

Budgie’s window manager is currently based on libmutter, so naturally with 3.12 will gain support to be a Wayland compositor. 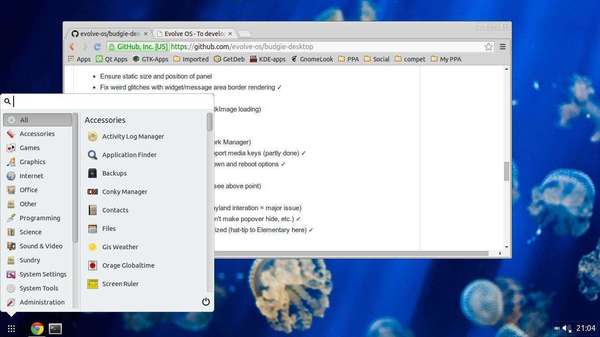 Budgie Desktop integrates with the GNOME stack, and as such requires certain components to operate correctly. Your distribution should provide an autostart file for gnome-settings-daemon in its package.

budgie-session will attempt to parse the file and launch it if it is found, which is guessed to be living in: /etc/xdg/autostart/gnome-settings-daemon.desktop

If budgie-session cannot locate the file, gnome-settings-daemon will not be launched, and dynamic settings for themes, etc, will not work until it is launched.

Ubuntu users: It is highly likely your theme or Ubuntu setup can affect the usability of budgie-panel.

If you have focus/use issues with the panel (i.e. not taking input), disable overlay scrollbars by running below command in a terminal window:

NOTE: Budgie is still in early development stage. It has a lot of to-do things, only install it on test machine before it gets table!

To install it (from a third-party PPA), press Ctrl+Alt+T on keyboard to open the terminal. When it opens, run commands below one by one:

If you like Budgie Desktop, please contribute or report to: github.com/evolve-os/budgie-desktop

One response to Try Evolve OS Budgie Desktop in Ubuntu 14.04