LibreOffice 4.4.5, the final stable release before LibreOffice 5.0 stable which is scheduled to be released next week, has been announced today.

It is the fifth bugfix release from the 4.4 branch of LibreOffice which contains new features and program enhancements. As such, the version is stable and is suitable for all users. This version may contain a few annoying bugs which will be fixed in the next bugfix versions to come.

1. To add LibreOffice PPA, open terminal either from the Dash/Launcher or via Ctrl+Alt+T shortcut keys. When it opens, run below command:

2 After added the PPA, open Software Updater and you’ll see the new LibreOffice release available for upgrade after checking for updates. 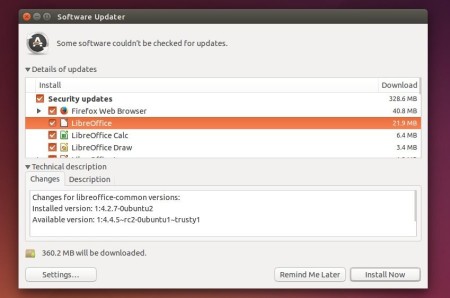 You can also use Synaptic Package Manager to upgrade the office suite.

3. Optional For those who want to revert back to the original LibreOffice version in Ubuntu, run below commands to install ppa-purge and purge the PPA which also downgrades all installed packages from that PPA: