After more than one year of development, the Audacity audio editor has reached the 2.1.3 release. Here’s how to install it in Ubuntu 16.04, Ubuntu 16.10, and their derivatives.

Thanks to an upgrade of the PortAudio library, Audacity 2.1.3 now properly supports Windows 10. It also features: 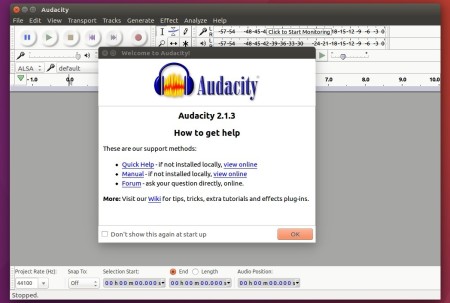 How to Install Audacity 2.1.3 in Ubuntu via PPA:

The Audacity Team does not offer official builds of DEB packages. Besides building from source, you can install Audacity 2.1.3 from my PPA (unofficial). Ubuntu 14.04 is excluded due to requirement of GCC >= 4.9.

1. Open terminal by pressing Ctrl+Alt+T or searching for “Terminal” from Unity Dash. When it opens, run command to add the PPA:

2. After that, upgrade Audacity via the Software Updater (Update Manager) utility:

Or you can run the commands below one by one to install or upgrade the audio editor:

For any reason, you can easily remove the PPA and downgrade Audacity to the stock version in Ubuntu via the ppa-purge tool: