Corebird 1.6 Snap now is available for install in Ubuntu 16.04 | UbuntuHandbook

Corebird 1.6 Snap now is available for install in Ubuntu 16.04

For those prefer Snap to Flapak, the latest Corebird twitter client 1.6 was finally available as snap, while it can’t be built as traditional package in Ubuntu 16.04.

Corebird 1.6 was release a few weeks ago with following changes:

It’s available in the PPA repository for Ubuntu 17.04, and Ubuntu 16.04 users can now install it via Snap: 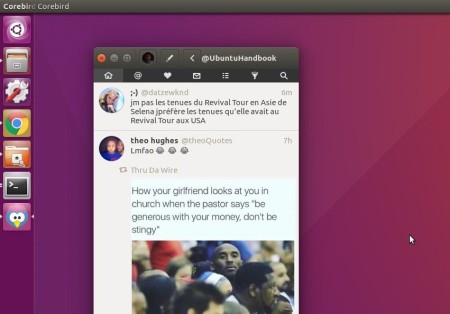 1. Open terminal via Ctrl+Alt+T or by searching it from app launcher. When it opens, run command:

2. Gnome platform is required by running following commands one by one:

In addition, to open links in snap apps, you need to run following command if you don’t already have it installed:

One response to Corebird 1.6 Snap now is available for install in Ubuntu 16.04