Also following new devices were supported in the release:

1. To install the software, download the package “hplip-3.19.5.run” from the link below:

2. Then make the downloaded file executable from its Properties dialog: 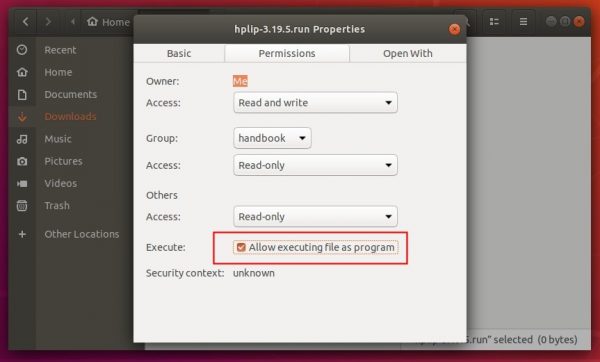 3. Finally open terminal either via Ctrl+Alt+T or search for “terminal” from app launcher. When it opens, run command to start installing it:

4. Then follow the terminal prompts, answer some questions to build and install HPLIP on your system. When everything is done, plug/re-plug your printers and enjoy!

NOTE: During hp-setup, automatic PPD selection path for some PS devices is wrong on Ubuntu 18.04. Work around is to select the PPD for the devices manually from “/usr/share/ppd/HP” path through browse option or reinstall cups.

Below are the commands to reinstall the cups filters.