The Audacity audio editor 3.0.0 was released a week ago as the new major release. Here’s how to install it in Ubuntu / Linux Mint via Flatpak package.

According to the Privacy Notice, Audacity may COLLECT personal data necessary for law enforcement, litigation and authorities. And it dissuade those under 13 years old from using the App.

It is incompatible with the GPL license. USE IT AT YOUR OWN RISK! 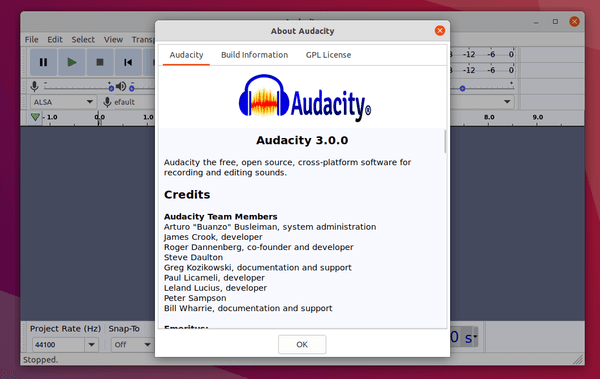 Ubuntu PPA has updated via the 3.0.x built against wxWidgets 3.1.3. As well, you can install the Snap package from Ubuntu Software.

The distribution’s build and Ubuntu PPAs are mostly “incorrectly built packages” as they are built against the wrong wxWidgets (3.0.x), however Audacity 3.0.0 requires wxWidgets 3.1.3.

Though I’m not a fan of the containerized Flatpak package, it’s so far the only ‘correctly’ build binary package since the Snap is still under testing.

Firstly open terminal from system app launcher. When it opens, run following commands one by one.

1.) For Ubuntu 18.04, add the PPA for updated version of Flatpak framework:

The flatpak package won’t replace the classic deb package. If you have more than one app icon in launcher, either remove Audacity installed via apt, or launch Audacity Flatpak via command in terminal:

To remove the software installed via flatpak, simply run command: