OBS Studio 27.1.1 is a hot-fix release for version 27.1, which was released yesterday. It introduced YouTube integration, so users can connect YouTube account without using a stream key. And, it features a new “Manage Broadcast” button to create and manage YouTube streams, a chat dock for public and unlisted broadcasts, set settings on per stream base, and bandwidth testing support in the Auto-Configuration wizard.

Other features include a 18-scene multiview option, a “Mask Only” option to the stinger track matte, an option to draw safe areas in the preview, and a feature to browser sources to allow limited control over OBS. 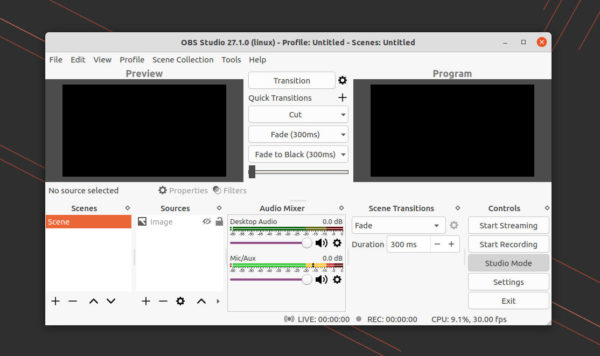 How to Install OBS Studio 27.1 in Ubuntu:

The Open Broadcaster Software is available as SNAP package, which can be installed via Ubuntu Software. If you have already installed the package, it will be updated to the new 27.1 automatically once the maintainer published it!

Also, the recording and live streaming app can be installed via universal Flatpak package via this page.

1.) To add the PPA, search for and open terminal from activities overview or press Ctrl+Alt+T on keyboard. When terminal opens, run command:

3.) Finally copy and paste the command below into terminal, and run to install the broadcaster app:

Or, upgrade the app via “Software Updater” (Update Manager) if an old version was already installed on your system.

How to Remove OBS Studio:

To remove the package, also run apt command in terminal with ‘remove’ flag:

And remove the Ubuntu PPA either using Software & Updates utility by removing the relevant line from ‘Other Software’ tab.

Or, run the command below in terminal instead: