HPLIP 3.14.1 Released with Security Fixes, Install it in Ubuntu | UbuntuHandbook

HPLIP 3.14.1 Released with Security Fixes, Install it in Ubuntu

HPLIP, an HP-developed solution for printing, scanning, and faxing with HP inkjet and laser based printers in Linux now is at version 3.14.1. This release mainly fixed two security fixes and added digital signature validation in upgrade feature.

2. Right-click on the file and go to its Properties window, under Permissions tab check the box “Allow executing file as program” 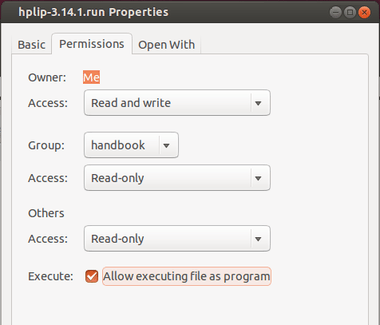 3. Press Ctrl+Alt+T on keyboard to open terminal. When it opens run below command to start the installer:

Answer the questions and you’ll finally get the latest version of HPLIP installed on your system.