Bluefish, a powerful editor targeted towards programmers and webdevelopers has reached version 2.2.5. Here’s how to install it in Ubuntu 13.10, Ubuntu 12.04, Ubuntu 12.10, Linux Mint and their derivatives.

According to the changelog:

Bluefish 2.2.5 is a minor bug fix release but has also quite some new features. The syntax scanning engine is faster after small changes to the text. The filebrowser is also much faster with less memory usage, with various fixes and new features. Projects now store the active document and active line numbers. Indenting is improved in auto-completion and the smart indenting. Bookmarks and paste special also have been improved. On OSX there are many improvements, such as Mavericks support, Retina display support, working system hotkeys, native input methods (Japanese, Chinese, etc.), opening files from the finder and Widget bindings on MacOSX are moved to Cmd+C|V|X|A and working. Furthermore almost all syntax highlighting has been improved, most notable jquery in javascript, HTML5, and HTML5 in PHP files. There are also many bug fixes, such as in wrap text on right margin, in the replace engine, the jsmin licence, the split lines feature, the auto-recovery and many obscure bugs. Last bluefish now has an appdata file. 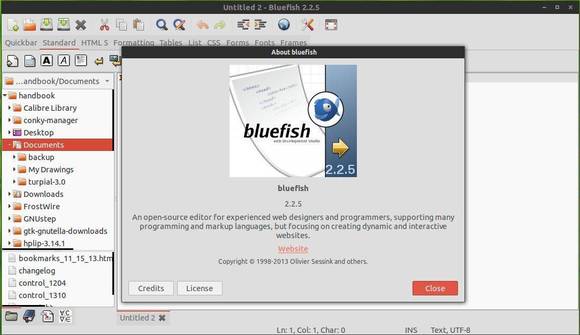 Press Ctrl+Alt+T on your keyboard to open the terminal. When it opens, run the commands below one by one to install Bluefish from PPA:

You can also install Bluefish compiled against GTK2: