A new release of Komodo Edit text editor has been announced with UI and user experience improvements and bug fixes.

Changes in Komodo Edit 9.1 according to the release note: 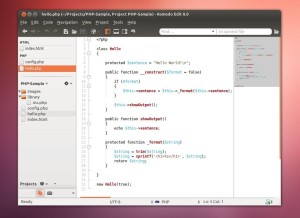 To install it, open terminal from the Dash/Launcher or by pressing Ctrl+Alt+T on keyboard. When it opens, follow below steps:

2. Refresh system cache via Software Updater or by running below command:

3. Upgrade the editor through Software Updater, or install it via below command: