Corebird, an open-source and native GTK+ twitter client, has reached the 1.4 release a few hours ago with some enhancements and bug-fixes.

The changes in Corebird 1.4 according to the release page: 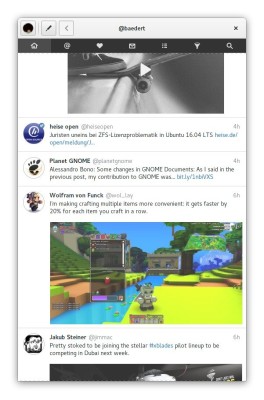 How to Install Corebird 1.4 in Ubuntu / Linux Mint:

The new release has been made into unofficial PPA, available for Ubuntu 16.04, Ubuntu 16.10, Linux Min 18 and derivatives. Spellcheck feature disabled due to build error.

2. Then update and install Corebird 1.4 via commands:

If you have a previous release installed, you can also launch Software Updater to upgrade the software after checking for updates:

Or grab the .deb package directly from PPA archive page.

To remove Corebird, simply run the command below in terminal: