Hugin is an easy to use cross-platform panoramic imaging toolchain based on Panorama Tools. With it, you can assemble a mosaic of photographs into a complete immersive panorama, stitch any series of overlapping pictures and much more.

The latest version 2017.0.0 is mainly a bug fix release. Changes include:

How to install Hugin 2017 via PPA in Ubuntu:

1. Open terminal via Ctrl+Alt+T or by searching for “Terminal” from app launcher. When it opens, run command to add the official PPA:

Type in your password when prompts and hit Enter

2. Then launch Software Updater and upgrade the software after checking for updates. 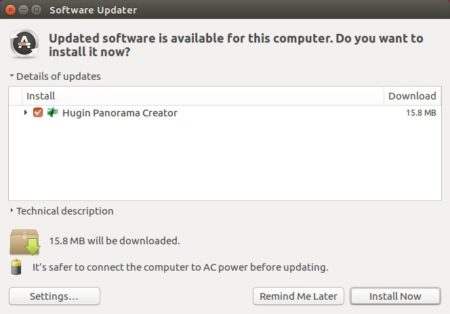 To revert back to the stock version of Hugin packages in your Ubuntu, purge the PPA via command: