HandBrake 1.4.0 Released with 10 / 12-bit Encoding, How to Install in Ubuntu | UbuntuHandbook

HandBrake 1.4.0 adds native 10 and 12-bit encoding support. Though it has limitations that some filters (e.g., Detelecine, Chroma Smooth, and more) do not currently support higher than 8-bit. With these filters enabled, you won’t benefit from the new feature.

You can select the new 10-bit / 12-bit encoder from the “Video codec” drop-down on the Video tab. For hardware encoders, the option will only be shown if the system supports it. 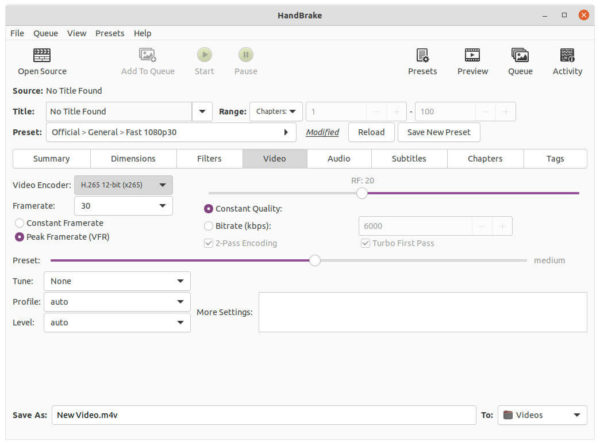 Other changes in HandBrake 1.4.0 include:

How to Install HandBrake 1.4.0 in Ubuntu:

HandBrake has an official Ubuntu PPA though it’s not updated at the moment.

Besides the PPA, you can download & install the flatpak package.

Then install the downloaded package via command:

(Optional) To uninstall the package, open terminal and run command:

One response to HandBrake 1.4.0 Released with 10 / 12-bit Encoding, How to Install in Ubuntu