How to Install Minecraft in Ubuntu 14.04 | UbuntuHandbook

How to Install Minecraft in Ubuntu 14.04

This quick tutorial is going to show you how to install minecraft, the popular sandbox indie game, in Ubuntu 14.04 Trusty Tahr.

An unofficial PPA provides an installer script to automatically download the files from Mojang’s servers and install the game on your system. So all you to do is get the script from the PPA. 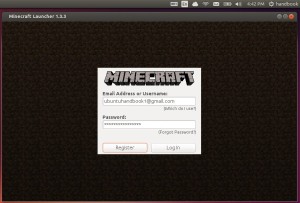 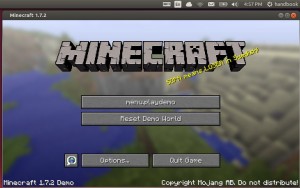 Before getting started, you may read the PPA description:

Since the script actually goes out to Mojang’s servers to get the files, I’m not redistributing any of their files. This project is simply an installer for their stuff.

# Not a Black Screen Fix

If your computer has issues running Minecraft with OpenJDK 7, then it will have issues running this. Because that’s what this is. I’ve tested this on multiple machines and it’s worked fine, but your mileage may vary. That said, one of the main black screen issues I’ve seen is people not running it with OpenJDK 7. ;)

To get started, press Ctrl+Alt+T on keyboard to open the terminal. When it opens, run the commands below one by one:

Once installed, open it from Unity Dash and enjoy! If you don’t want to add the PPA, download and install the .deb directly from launchpad page.

12 responses to How to Install Minecraft in Ubuntu 14.04