The 3.2 release of Rhythmbox, Ubuntu’s default music player, was announced just a few hours ago with some new features, bug fixes and translation updates.

According the the changelog, Rhythmbox 3.2 brings a Soundcloud plugin, support for disc and track total tags, ability to clear, re-fetch and manually set cover art using the song info window.

There are also some bugs has been fixed in the new release:

How to upgrade to Rhythmbox 3.2 in Ubuntu:

1. First open terminal by pressing Ctrl+Alt+T on keyboard. When it opens, run below command to add the PPA:

2. After adding the PPA, launch Software Updater (or Update Manager) and install available updates for Rhythmbox after checking for updates. 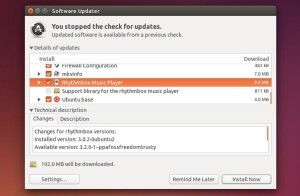