How to Install MAME Emulator 0.192 via PPA in Ubuntu | UbuntuHandbook

How to Install MAME Emulator 0.192 via PPA in Ubuntu

MAME is a free and open source emulator designed to recreate the hardware of arcade game systems in software on modern personal computers and other platforms.

The latest MAME 0.192 was release a few days ago with following changes:

There’s an unofficial PPA contains the latest packages for Ubuntu 17.04, and Ubuntu 17.10 so far. Unfortunately, Ubuntu 16.04 build is not updated any more since version 0.189.

Input your password (no visual feedback) when it prompts and hit Enter to continue adding the PPA.

2. Then upgrade the emulator via Software Updater utility if you have a previous release installed. 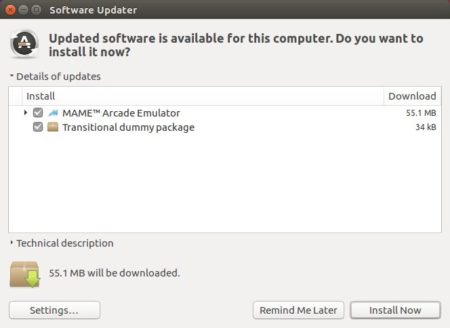 or run commands one by one in terminal to install it:

To remove the PPA, launch ‘Software & Updates’ utility and navigate to Other Software tab.