Some applications, e.g., DVDStyler and LiVEs, in your system may still use the old FFmpeg libraries. You need to rebuild them yourself to make the new FFmpeg libraries take place

2. To upgrade from a previous release, just launch Software Updater and upgrade the software libraries after checking for updates. 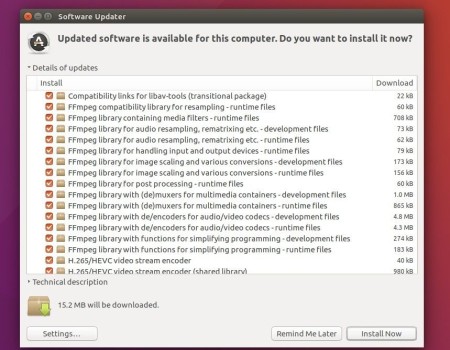 Or run the commands below in terminal:

After installation, run ffmpeg in terminal to get the version info and build details.

To restore and downgrade FFmpeg to the stock version in Ubuntu 16.04, purge the ppa via ppa-purge:

This tutorial is going to show you how to install the latest version of FFmpeg, so far it’s FFmpeg 2.1.2, in Ubuntu, Linux Mint and their derivatives via PPA.

Sam Rog has been maintaining the most recent FFmpeg packages in his PPA for Ubuntu, Linux Mint and their derivatives. The PPA is trustable and so far it supports Ubuntu 14.04, Ubuntu 13.10,

To add the PPA, press Ctrl+Alt+T on keyboard to open terminal. When it open, run below command:

Then you can check for updates via Synaptic Package Manager. Or just run below commands instead:

The FFmpeg 2.0 has been released for months. If you don’t want to build it from source, now you can install in Ubuntu 13.10 Saucy, Ubuntu 13.04 Raring, and Ubuntu 12.10 Quantal via a PPA repository.

As you may know, FFmpeg is a complete, cross-platform solution to record, convert and stream audio and video. It includes libavcodec – the leading audio/video codec library. Version 2.0 is a major release which brings FTP Protocol support and filter graph description readable from file just to name two. Read more at www.ffmpeg.org

Press Ctrl+Alt+T on your keyboard to open terminal. When it opens, run below command to add the ppa:

The PPA also contains other packages that you may not want. Remove the ppa after installation by: